Play is often described as the “work” of childhood, where children can make friendships, learn social skills, come to understand expected group behavior, consequences, turn taking, and cooperation, not to mention have some fun! Children with autism spectrum disorder (ASD) can reap these same benefits by playing games with other kids, though many do not naturally gain the aforementioned skills simply by being exposed to games or other play objects, as might their non-disabled peers. As with many concepts, games and their component skills may need to be explicitly taught, supported, and adaptations made in order for a child with autism to experience success with the activity.

General Guidelines for Adapting Games for Children with Autism

While the type of adaptations used for a game will depend on the child’s individual needs and the game being played, some general guidelines may be applied to ensure a successful outcome with any social play situation.

Games and Adaptations for Children with Autism 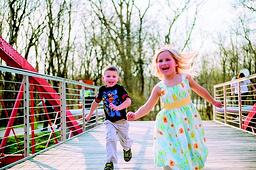 Unlike board games or card games, which often require players to talk to one another throughout the game, physical games like tag can work well for children with ASD because there aren’t a lot of social interactions. However, the idea of being “it” can be a little abstract and children need to understand the objective and rules of the game, such as how to tag someone else, and staying within a certain area, in order to keep everyone safe. To make sure tag is enjoyable for all students, the following adaptations can be made:

This timeless children’s game may be difficult for children with autism who like to run or hide as it can appear to encourage those potentially dangerous activities. However, because of the limited social interactions and gross motor skills used, it can be a good choice for kids with ASD. The following adaptations may be helpful for playing hide and seek:

Adaptations for Hide and Seek: 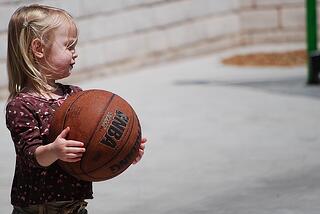 Many children with autism have sensitivities to sound and other sensory inputs. Basketball, which is often played in a potentially loud or echo-prone gymnasium, naturally has many loud noises such as the bouncing of the ball, a referee’s whistle blowing, shoes squeaking on the floor, or other players yelling at one another that can cause stress and/or anxiety in a child with autism. While adjusting the volume of sound in a gymnasium may not be feasible, there are a few options for helping a child with ASD to be more comfortable in the environment.

Hopscotch is a surprisingly complex game that supports children’s physical coordination, balance, and cognitive development. From working on midline development (hopping on one foot), body control (not stepping on the lines), muscle strength (leaping over the marker), to hand eye coordination (tossing the marker), and fine motor control (picking up the marker), this seemingly simple game can have a lot of benefits! However, these very skills can be challenging, and thus potentially frustrating, for some children with autism, and may dissuade them from playing. Adapting the game can help the frustration level and provide opportunities for social interactions and turn taking with peers.

Many children with ASD thrive with predictability and knowing what to expect. In this way Simon Says, in which one player is designated “Simon” and stands in front of the group, directing the others to perform various actions, may be challenging because no one except Simon knows what activity will be called out next. The apprehension a child may feel about not knowing what is coming next may prohibit him/her from paying attention to the language being used, (“Simon says jump” versus “Jump”,) and cause the child to be “out” before they truly have a chance to be successful.

As with many children’s board games, Candy Land is a fairly simple game to play, but there are sub-skills that may prohibit children with disabilities such as autism from being successful at playing it without explicit instruction. For example, it may be difficult for a child to remember his/her color game piece, how to follow the path from beginning to end, how to take turns, or how to understand when to move forward or backward on the board. Without these skills in place, game play with peers is likely to be frustrating for all involved. While these sub-skills are found in many games, some adaptations specific to how they might pertain to Candy Land are listed below:

Chutes and Ladders is played on a very busy game board that can be confusing to look at. Keeping track of the direction in which to move game pieces, as well as understanding when to move “up” a ladder or go “down” a chute on the two-dimensional board can make for a frustrating game-play experience. Children in general may also struggle with the fact that this game is won and lost by chance, depending on the use of a spinner and the chutes and ladders that are landed on throughout the game. Children with autism in particular may struggle with knowing what to say to deal with feelings of frustration or anger throughout the game if they are not winning or in the lead. In order to make it easier to understand the visual stimuli within the game and focus on appropriate language to use with peers, the following adaptations may be helpful:

Hi-Ho Cherry-O encourages players to work on their counting skills, including basic addition and subtraction, in order to fill their buckets with 10 cherries from their cherry tree. The game is played with a spinner and taking cherries off or putting them back on the tree as specified by the spinner. To aid children with autism in keeping track of the rules and encouraging language use, the following adaptations can be made:

This classic childhood game can be very abstract and confusing for children with autism. Not only does this game require that children be familiar with the concept of fishing, but also that they utilize language (“Do you have any 5s?”), memory (I need a 5 to make a match, I remember Jane asked for a 5 so Jane might be a good person to ask), and perspective-taking skills (Jane asked Anthony for a 5 so Jane probably has a 5), that can be difficult for a child with autism. In order to make this game more concrete, some adaptations can be made:

Old Maid does not require the same language, memory, or perspective-taking skills as other card games, so it can be a good game for children for whom these skills are a challenge. As the objective of the game is fairly simple: don’t end up with the Old Maid, this game can provide children with autism a good opportunity to practice their social skills with peers throughout game play. 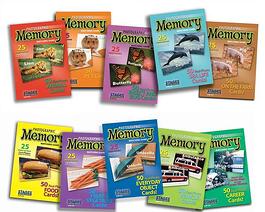 As the name suggests, the game of Memory relies heavily on visual memory, which for some children with autism is a great strength. Other children will struggle, as spatial awareness and understanding the location of items as they relate to each other can be particularly challenging, let alone remembering an item’s location when it can’t directly be seen. In order to support children for whom visual memory is difficult, the following adaptations can be made:

To play this classic card game, players need an understanding of the number concepts greater than and less than. To aid children with autism or others who might not have these concepts solidified, some adaptations can be made: